More on Sci Am engine

This page began when I stumbled across one of Nikola Tesla's more obscure patents, and here is the basis of it:

Nikola Tesla was a great man, to whom we owe AC electricity distribution and the induction motor, though it is well known that he lost the plot in a major manner towards the end of his life. The Thermo-Magnetic Motor, however, was patented in 1889, not long after his greatest success; the sale of the patent rights to his polyphase system of alternating-current generators, transformers, and motors to George Westinghouse, head of the Westinghouse Electric Company, in May 1885.

The thermomagnetic motor, however, was not exactly a triumph. It exploits the fact that ferromagnetic materials lose their magnetic properties when heated above a critical temperature. This is called the Curie temperature.

Left: Diagram from Tesla's patent of 1889

Assume that we start with the armature A attracted to the magnet N. A is heated by the gas burner H, loses its magnetic properties and is pushed up and away from magnet N and burner H by the spring W. A then cools, becomes magnetic again, and is attracted back to the magnet, where the burner starts to heat it up again. The cycle turns the flywheel 13 through connecting rod 12. Tesla took out US Patent number 396,121 dated Jan 15, 1889, though why he bothered is hard to fathom. The patent shows several variation on the idea, including the use of an electromagnet instead of a permanent magnet. The obvious problem is that a mass of iron such as armature A can only be heated and cooled slowly. This engine would be hard pressed to run at 1 rpm, and its power output would be negligible. At this point I concluded that even the greatest of innovators have their off days, and was prepared to write off thermomagnetic engines as one of the deadest dead-ends in the history of power production. However... fortunately I did a quick Google before committing page to web, and I was surprised to find that research into thermomagnetic engines was alive and well.

Sci Am lighter flints pic.jpg 'The Amateur Scientist' was a monthly feature in Scientific American for many years, though it is now long gone. One of the experiments described was a thermomagnetic motor composed of a wheel with a vertical axis, its periphery being studded with lighter flints, and part of it being in the field of a permanent magnet. I now have the details: 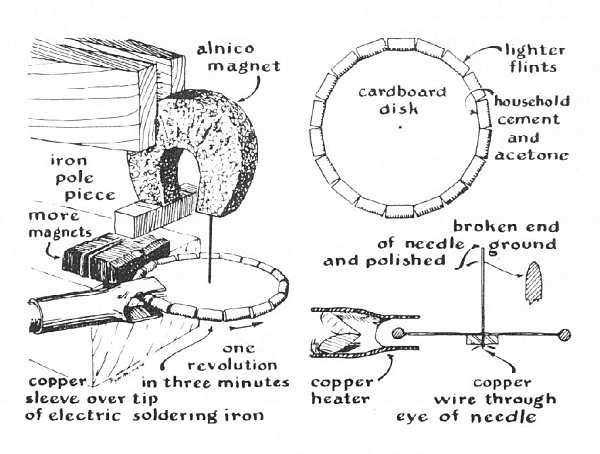 A thermomagnetic motor made with lighter flints

This engine was devised by Roger Hayward; it is not currently known in which issue of Scientific American it appeared. The lighter flints on one side of the permanent magnet (labelled "more magnets" in the illustration) are heated by a modified soldering iron, and so are not attracted to it. The unheated flints on the other side of the permanent magnet are attracted, and so the wheel revolves in the direction shown. The power output however appears to be tiny, and Hayward apparently had to resort to a kind of magnetic bearing involving a needle to get any movement at all. Even then, the rate of rotation was only once in three minutes; I can only assume that lighter flints are but weakly magnetic and the forces involved are very small. Lighter flints are not made of flint stone at all, but Ferrocerium Apparently the active ingredient in this case is the cerium; cerium alloys are used in permanent magnets.

Researching this topic is rather frustrating because almost all the information is in the form of research papers locked up in websites you have to subscribe to. However I have gleaned some information. The fact that metallic gadolinium is ferromagnetic with a Curie temperature of only 294 degK (21 degC) has been used to make simple thermomagnetic engines for laboratory demonstrations. These can be driven by an electric lamp or by sunlight. Presumably these engines will not work on a warm day as then the material would always be above the Curie temperature. There appears to be current interest in thermomagnetic engines that can use the considerable heat in IC engine exhausts to generate power. These use materials with much higher Curie temperatures than gadolinium, such as iron-nickel-chromium alloys. The original material for what follows was written in Japanese; I have done my best with translation but accuracy-wise you'd better keep your fingers crossed. Modern thermomagnetic engines are not reciprocating like Tesla's proposal, but produce continuous rotation. The ferromagnetic material is a rotor in the form of a ring or cylinder, which moves into a magnetic field created by permanent magnets. It is heated at one point so that it has lost its ferromagnetism when it leaves the field. There is therefore a steady net pull on the rotor, causing it to turn on its axis. The rotor is then cooled and regains its ferromagnetism before it re-enters the magnetic field.

Configuration of a current experimental thermomagnetic motor. A practical version of this can generate 100W of power at 1.5 revolutions per second.

This appears to be delightfully simple, and so it is; but there are problems. An obvious one is that heating and cooling cannot take place very quickly, so the speed of rotation is very slow, typically 0.5 to 1.5 revs per sec. Presumably this can be geared up to drive an electric generator. Another difficulty is that eddy currents are induced in any conductor moving in a magnetic field, and this effect acts against the movement of the rotor.

Power and torque curves for the thermomagnetic motor.

The efficiency is an not especially stunning 0.021%. This is 0.19% of the possible Carnot efficiency.

There don't seem to many of these. "Magnetic Motor with Temperature-Related Activation" (US Patent 5397948) sounded promising, but it only uses the Curie effect to move latches on cooker doors, etc. There is no continuous generation of power.

As previously noted, information on thermomagnetic motors on the web is not very accessible. The stuff that is open-access mostly relates to laboratory demonstration models of neglibible power output and utility. To find more of these, put "Curie motor" or "Curie engine" into Google. Here are some results:

www.feiradeciencias.com Apparently based on the Scientific American motor.